Here is a communication from an advanced German buckle collector, along with photographs in support.
“Dear Mr. Royster:
I am a German belt buckle collector and have been for some forty years. I also subscribe to the Military Collector and read the article on RODO SS buckles by Dr. Thayer.
I also read the uproar on the Wehrmacht Awards Forum about the article, several belt buckle dealers proclaiming that the pictures Dr. Thayer showed were all of fakes.
I have news for them. The buckles Dr. Thayer showed are 100% genuine. I have several original RODO pieces that I have had for 40 years and I assure you, they are not fake.
The loudest voice is one of a Jean-Pierre Redeuilh.
He sells buckles and “authenticates” them for dealers like Gottlieb and here are excerpts from a complaint about this one posted on the WAF site:
“Do you really write C.O.A’s for dealers as an expert on buckles as Royster is saying?. And for Gottlieb?. Is this a service you charge for and do you trade in buckles?.”
And “… You know that there is a book full of bad CH helmets with C.O.A’s out there, you know what their worth?.”
RODO made buckles for many different branches of German service but they were always made in the same way, regardless of what unit they were intended for.
There have been a number of newly-made buckles flooding the market. These are made in India, China, the UK and Poland. None of them have maker’s marks on them so crooked dealers (most of them) stamp in any kind of maker’s name they wish.
That is why there are so many RODO buckles in collections and being offered by the crooks that are made differently than the originals. And that is why the collector who has one or the dealer who sells one, hates what Dr. Thayer wrote, what the Military Advisor published and your own articles.
The screaming of Jean-Pierre Redeuilh reminds me of the old saying that it is the kicked dog that yelps. Anyone who works with Gottlieb is not to be considered as a reputable source and an SS dress brocade belt he “authenticated” is a complete recent fake.
Just keep up the good work exposing fakes and fakers and think that if the simpletons who jabber on the WAF don’t like you or your work, consider this a compliment!
Sincerely,
Henri Fouché 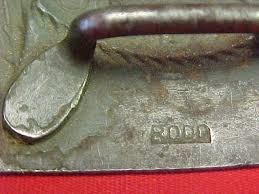