Among the more exotic fakes created by the late Colonel James Atwood, is the renowned “Adolf Hitler Suicide Pistol.”

This appeared on the cover of Argosy magazine and had been sold to an Andy Wright of Saskatchewan, Canada for a very large sum of money.

Unfortunately for the proud owner, the pistol is certainly a Walther-made PPK model but it was made after 1965.

As this factory location only began in 1965, it ought to be obvious to anyone that a pistol with that marking could not have been Hitler’s pistol.

And on the right side of the pistol, shown in the Argosy article, was a pistol serial number.

A contact with the current Walther factory office disclosed that that number belonged to a PPK model made on special order for Atwood.

He was then stationed in Berlin, working for the CIA.

Once this highly negative information began to become public, the owners of the pistol had it re-engraved on the slide (a very sloppy performance) and had the serial number carved over and obliterated.

It should be noted that the possession of an unnumbered handgun in the United States is a Federal crime.

A well-known American dealer in fakes and a founding member of the WAF, was planning to exhibit this as another of his Precious Treasures but suddenly dropped the idea.

As a matter of interest, Hitler’s pistol was a Belgian Browning 7.65 pistol, the serial number of which is still registered with both the Berlin and Munich police departments. This is the only pistol Hitler ever owned or carried. 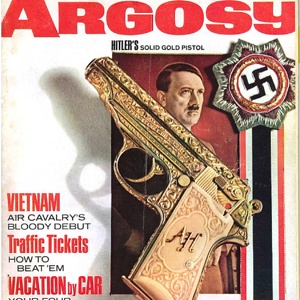 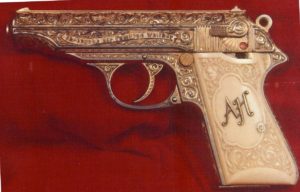 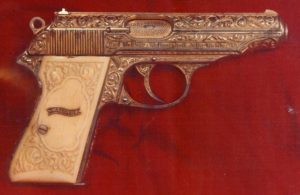