Note: We are presenting in this posting an article by Christian Jürs.. Mr. Jürs has a large collection of original German military decoration documents and is currently preparing a heavily illustrated book on the subject. ADR

Called by the Germans ‘Verleihungs-urkunden’ or Presentation documents, when a member of the German military was presented with a decoration, he received a document attesting to this.

These documents were printed on paper and were usually 150×210 mm in size. The awardees name and unit were typed onto the paper (hand-lettered in some cases) and the document was signed by authorized personnel and most generally had the so-called ‘Dienstsiegel’ or unit stamp, on the lower left side.

It should be noted that original documents were always printed on paper which did not contain chemical whiteners and are non-reactive to an ultra-violet light (or black light). As paper whiteners were not used until 1951, any document purporting to be of an earlier date that reacts positively to the black light should be considered as not authentic.

The first is a presentation paper for the wound badge in gold. It is 150x210mm in size. It is for an NCO of an Armored Reconnaissance unit who was wounded five times and is signed by the chief doctor at a Vienna military hospital. 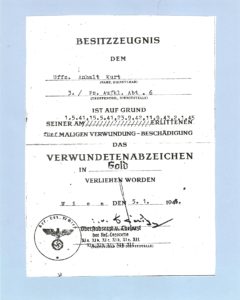 The second, upper left, is a certificate for the German Cross in Gold presented to a General of Infantry. It is 254×356 mm in size and is signed by Field Marshal Wilhelm Keitel.

The third, upper right, is a certificate for the Iron Cross 1st Class for an SS Colonel in a Latvian SS Volunteer unit. It is 150×210 in size and is signed by General Burgdorf of the Army Personnel Office.

The third, lower left, is a certificate for the U Boat clasp in Silver. It is 150×210 in size and is ink-signed by an Admiral in command of the U boats.

The fourth, lower right, is a certificate for the Front Fighter clasp of the Luftwaffe, Observer, in gold with pendant. It is 150×210 in size and is signed by the group commander.

Juers Militaria is a site that specializes in various areas of military collecting. Primarily, we offer various examples of German WW II military decorations presentation papers, also selected items of militaria of the Napoleonic French, US Civil War, Imperial and Second World War German periods. As a general rule, we deal with reasonably priced items and also as a general rule, do not handle political or personality items. We are always interested in the views of collectors and we do purchase items which we feel would fit into our parameters. Remember that we cannot pay full retail prices for items because this would then make sale to the public prohibitive.