During the course of the war, the Wehrmacht and SS rarely issued stamped aluminum shoulder board unit insignia. Replacing these for enlisted personnel were machine-embroidered devices produced on a strip of cloth. For the Heer the cloth was field grey or dark green in color and for the SS in black.

The piece shown here is for the SS-Panzer-Grenadier Rgt.’Der Führer.’ This was formed on March 17, 1938 in Vienna and was later attached to SS-Division’ Das Reich’. The shoulder board is shown on a second pattern SS camouflaged tunic. 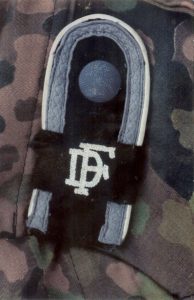